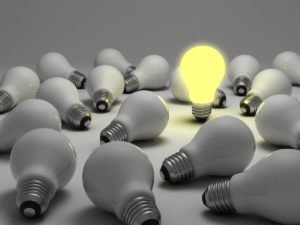 Thomas Edison on his first day of kindergarten, was brought home by a teacher who told his parents, “He’s an imbecile and unteachable.” When Edison looked back on his school years, he said, “I was always at the foot of the class. I felt my teachers saw no potential in me and that my father thought I was stupid.” His mother home-schooled him because he was different.

During childhood, a bout of scarlet fever and untreated ear infections left him deaf. He was fired from countless early jobs. Yet he saw beyond conventional thinking and was active in business up to the end, leaving us with 6,000 inventions that changed the world.  Not bad for an “imbecile.”

Richard Branson, the owner of the Virgin Group, once said, “We are Britain’s largest private company, and I still can’t work out the difference between gross and net. I look at a crossword puzzle and I just go blank.” As a young boy he was dyslexic and “number blind,” meaning he could not perform simple mathematical computations. According to him, he was “pretty hopeless” when it came to traditional learning and he dropped out of school at age 16.

Today the Virgin Group, which Branson owns and operates, consists of more than 300 companies. It is reported that he has an estimated net worth of 5 billion dollars.

Are you true to yourself?

It takes courage to know yourself and then reveal who you are to others. Society does not encourage it. From early on we’re taught to look alike, dress alike, act alike and think alike, ad infinitum.  However, when we find the courage to honor our uniqueness, we re-energize and become passionate and excited about life. We begin to follow our individual path.

I believe the human spirit is naturally adventurous, ruled by a higher intelligence that wants us to express the fullness of life. When we allow it to flow through us, our inner curiosity leads us to amazing discoveries and ways to fulfill our dreams.

Our responsibility is to accept and honor who we are. Don’t look at what you can’t do, develop what you can. Just for today, challenge yourself – and then the next and the next.

You may not change the world with 6,000 inventions or own a multi-billion dollar company, but I guarantee that your legacy will leave an original and eternal imprint.

It beats just fading away.