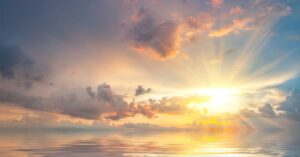 The 21st century is proving to be challenging. Everywhere we look there is discontent, upheaval and division. We are witnessing extremes in all areas. Progressives are too progressive and conservatives are too conservative. So why and where are we headed?

It’s a time of change and transformation. New ways of understanding ourselves and life itself. However, the resistance to change is causing tremendous upheaval.

This universal shake-up is powerful, purposeful and sometimes painful, yet our collective journey will prove in the long run to be healing. Rejuvenating, energizing and even transcendent – taking us beyond the limits of knowledge and former experiences.

How will it reveal itself?

Through work that is and meaningful and generous. Humanitarian elements form the foundation for The New Art. It is alive – radiating light, which contains properties and characteristics of healing and inspiration. It is felt.

The New Art expresses the qualities of our higher nature. It gives us a deep and expansive insight, which allows for the flow of heightened creativity to manifest in the concrete world. It becomes tangible through letting go of old, brittle beliefs and thoughtforms that hold us back.

Dependency on our five senses will lessen as they lose their status of being the grand interpreter of life. Our awareness evolves as we find the courage to shatter our limitations and forge a new path. We come into our own.

Worldwide each of us have the opportunity to bring forth The New Art. Not just people who are labeled artists but all people who work for the common good of all.

However, many will refuse to accept The New Art, for mindsets don’t change easily. As a good friend of mine says, “The king and queen do not want to give up the keys to the castle.” Some will clench their fists, prepared to fight for the old and well-trodden way. Mainly because change means adapting to new ways that require personal change and responsibility.

Dictators and authority figures in positions of power often resist the most. External power is difficult to let go of – especially when personal identity is defined by it and ruled by ego. Their resistance is often met with uprisings of the common man determined to end authoritarian leadership and governments. Conflict is predominate worldwide causing high levels of fear and stress.

The only way to temper these difficult times is by individuals finding peace within themselves. In other words, resolving their own inner conflict. This leads to enlightenment. Self-aware people who understand the responsibility we have for ourselves and to one another.  Unified, they are the ones who will break through the walls of hatred and ignorance.

Their intuition will guide them in all they do. No matter their culture, background, color of skin, status or profession, they will be the creators of The New Art. Creative problem-solving will be applied to all areas and aspects of life. They will know where they’re needed and will graciously be there with the intent to give of themselves.

Wherever they go and whatever they do, embedded in their work will be their love of mankind. Although unspoken, their work will speak to the hearts of all people. This is The New Art – made tangible through the ever-evolving consciousness of mankind. Artistry as never seen or felt before.