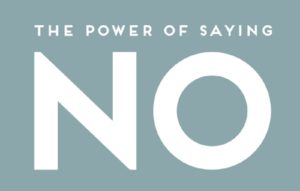 Why is it so hard to say no?  It appears to be embedded in our DNA – to rescue, enable and save others – even if we’re drowning in the process.

At one time or another most of us have felt stretched beyond our comfort zone because we feel a sense of obligation to others.  That is when self-care goes out the window. We grit our teeth while saying yes to something we DON’T WANT TO DO …but we do it anyway for a multitude of reasons.

We want to be liked. We don’t want to hurt another’s feelings. We’ll lose a friend. We don’t want to be seen as selfish, mean or uncaring. When answering to our boss we fear that saying “no” might result in being thought of as being rude or lazy or passed by for a promotion, a pay raise, or even fired.

What about your boss – the CEO, manager, supervisor, director, manager, owner? When they can’t say “no” it affects the entire company. It also affects their entire mindset as it’s preset to please and not rock the boat. Progression and growth are in danger of being thwarted.

The daily tug-of-war that challenges leaders.

Leaders are often faced with yes or no situations. When determining their response it’s not uncommon for them to seek the answer outside of themselves. They can research, study history, methodologies, charts and formulas as they seek the “right answer.” Or call upon the experts for their professional opinion. But as the leader the ultimate decision is theirs.

What if their gut feeling goes against the grain of the common consensus, yet keeps nagging at them and feels like the right direction? If they tend to be a “yes” person, will they give in and lead based on what they feel is wrong? If so, they are ineffective leaders.

Regardless of our positions and titles, when we can’t say “no,” we have reduced our authenticity. We have lost our true  north. We are not tuning in and listening to ourselves. We know the answer but it takes courage to trust and honor it.

How do we escape the ever-seductive obligation to say “yes” that is often drenched in guilt?

First you realize that by saying yes to everything you are internalizing negative and destructive emotions. That’s quite a price to pay for not being able to say “no.” Next you remind yourself that by saying “no” you are practicing preventative health care at its best. It does not mean that you’re not capable. It simply means you are being honest with yourself and others in the moment. You are taking good care of yourself as a means of offering quality care to others when it feels right to say yes.

As a leader it means you trust yourself and rely on your inner strength to follow your own lead. You free yourself from mandatory obligation and trust your own instincts.

When I was first learning to say “no,” a good friend said, “Susan, no is a complete sentence. You do not have to add a lengthy laundry list of why you’re choosing to say it.” On that note I’ll share with you one of my favorite quotes, although I don’t know who said it: “Do what is best for you. In the long run, it will be best for everyone.”

When you change gears and begin to operate differently it can rock a few boats in the short run. However, when you honor yourself and act with integrity, it will always prove to be what’s best for everyone in the long run.