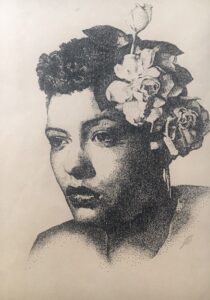 After my divorce I reconnected with a friend from my childhood. Not having seen each other for over 20 years we had a lot of catching up to do.

We met at her boyfriend’s place where she was living. I knew she had been artistic but I didn’t see any of her paintings around. When I asked about her art, she took me outside to a room off the garage.

She opened the door and there stacked on the floor and against the walls were her paintings. The room was dirty and filled with cobwebs. I was in shock. She must have seen it on my face as she apologized for the poor state they were in. She mumbled that it had been awhile since she had touched a canvas.

She gave me the above print she had painted of Billie Holiday, a prominent jazz singer. The technique she used is call stippling – a painting done with black dots. It doesn’t take an expert to see that she is exceptionally talented.

I keep the framed print on the wall by my desk. It reminds me of the sadness I felt when walking away from her house after witnessing the waste of her talent. It also reminds me to not waste my own through neglect, laziness or fear. Most of all, it inspires me every day to show up and use my talents.

Do you have talents you’ve neglected or put on hold? It’s easy to do and even shove them to the bottom of your “to do” list, which could be called the “someday” list. Unfortunately, carrying around the burden of the “someday” list can cause sadness and even depression.

So dig deep and find the inner strength to put them to the top of your list. Then prepare to check them off daily as you free yourself from the weight of neglect – a very heavy weight to carry.

Henry Matisse is widely regarded as the greatest colorist of the 20th century
and as a rival to Pablo Picasso in the importance of his innovations.