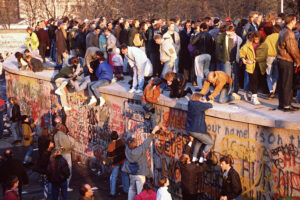 When the movie The Secret came out in 2006, people watched it and became excited to learn that they could manifest parking spaces. Through focused thought and visualizing the space it would effortlessly appear.

However, like many good things, if it requires daily practice, all too often distraction and forgetfulness sets in. That’s a tragedy.

If the audience of The Secret had maintained their enthusiasm and continued to use the power of their minds daily in all matters, their lives would be easier today. Not only that but the world would be a safer and kinder place.

Unifying for the Good of All

On November 4, 1989, half a million people gathered in East Berlin in a mass protest of the Berlin Wall dividing communist East Germany from West Germany. Five days later on November 9, 1989 it crumbled.

What the world witnessed was the power of the collective will of the people. Over half a million people united in thought caused its downfall.

When enough people use the power of their mind for the good of all, change takes place. But it takes individuals with strong and focused mindsets to initiate it.

Achievement of that is possible under all circumstances. Dire conditions often demand it. Although, comfortable lifestyles can lead to mental vagueness, which diminishes internal power.

You have within you the ability to improve your life. It takes patience and willingness to sharpen your mental focus. It takes practice to manifest more than parking spaces. However, with dedication you can become part of the collective will which leads to monumental change that betters the world.